Jamaica’s minister of culture, gender, entertainment and sport, Olivia ‘Babsy’ Grange, says there are big plans being made in Jamaica and throughout the year in Toronto, across Canada and the United States to celebrate the centenary of Louise Bennett-Coverley.

She commended the Jamaican Canadian Association (JCA) for hosting its annual Boonoonoonos Brunch to recognize the work and the contribution that Miss Lou has made as well as to promote Jamaican culture. The event was entitled “Celebrating Miss Lou’s 100 – The mother of Jamaican culture.”

Minister Grange said the co-executors of the Jamaican cultural icon’s estate, Pamela Appelt and Fabian Coverley and his family, are determined to ensure that Miss Lou’s spirit, works and name remain alive, and that her legacy is recognized along with her husband, Eric Coverley.

Bennett-Coverley was born on September 7, 1919 in Kingston and died on July 26, 2006 in Toronto where she lived for almost two decades.

“Miss Lou was someone who was boasy but humble. She was serious about her Jamaican culture and the Jamaican language. And she went to England and she colonized England with the Jamaican talk and she came to Canada and she also made an impact here to the extent that she has been honoured with her room at Harbourfront, and she has been honoured by McMaster University having her archives. Jamaica has impacted the world through many icons, including the Hon. Louise Bennett.”

She said Miss Lou was an entertainer and someone who would laugh at herself too.

The minister described Miss Lou as the early entertainer in modern Jamaica, a great poet and a great storyteller.

“She gave us a sense of self and identity and therefore this celebration here that you’re having in recognizing her during the year of her centenary is very timely having it during Black History Month.”

Grange noted that in Jamaica February is Reggae Month and Miss Lou is a part of the Jamaica Music Museum which looks at all the genres over the years that Jamaicans have given to the world.

“From the early traditional music to the modern music of Jamaica which is called mento, many call it calypso, through rock steady, ska -- there are more ska bands in Europe than anywhere else in the world -- dub and up to reggae.”

She said reggae is a genre but it’s also a generic term for the sounds of Jamaica.

The minister said last year the government nominated reggae to be inscribed on UNESCO’s intangible cultural heritage list. The nomination has been accepted.

“We are determined. If Miss Lou was not determined we wouldn’t be celebrating her today,” she said, noting that the event was a celebration of Jamaica’s culture, people, women and families.

The JCA made presentations to McMaster University where Miss Lou’s archives are housed and Harbourfront Centre that has a room named in her honour – two organizations that it said ensure her legacy lives on.

“Miss Lou is one of your great national icons but she is also a citizen of world. Her work as poet, a performer, a protector of Jamaican language spans five decades and she performed in countries around the world. For this reason McMaster University Library is very proud of the very small and modest role it has played in supporting Miss Lou’s legacy,” said Vivian Lewis, McMaster University librarian.

She lauded Pamela Appelt and Fabian Coverley for their invaluable assistance in bringing Miss Lou’s archives to McMaster. She also thanked partners in Jamaica, notably the National Library of Jamaica.

In 2011, McMaster announced the donation of 40 boxes of archival materials from Miss Lou’s life in Canada to the university’s renowned William Ready Division of Archives and Research Collections.

Jeremy Smith, chief development officer, and Mary Landreth, chief marketing officer of the Harbourfront Centre accepted the award presented to this key cultural organization on the waterfront of Toronto.

The idea for the creation of Miss Lou’s Room came from Appelt, a board member of the Harbourfront Centre, who linked the centre with Miss Lou’s family.

Miss Lou’s Room opened on July 26, 2007, and since its creation, has been a hub for thousands of students participating in the Harboufront Centre’s school visits programme.

JCA president Adaoma Patterson said the brunch started in 2000 as a fundraiser and presentation of Jamaica’s culture.

The organization is planning a group trip to Jamaica for the Miss Lou centenary celebration at Gordon Town Square in St. Andrew from September 5-12. The square will be renamed Miss Lou Square on September 7.

Also in attendance were Janice Miller, high commissioner of Jamaica to Canada, and Lloyd Wilks, consul general of Jamaica at Toronto.

The event was emceed by actor and producer, Marcia Brown, with entertainment by poets, Nadine Williams and Jermaine Cowie, and the Elite Dance Troupe. 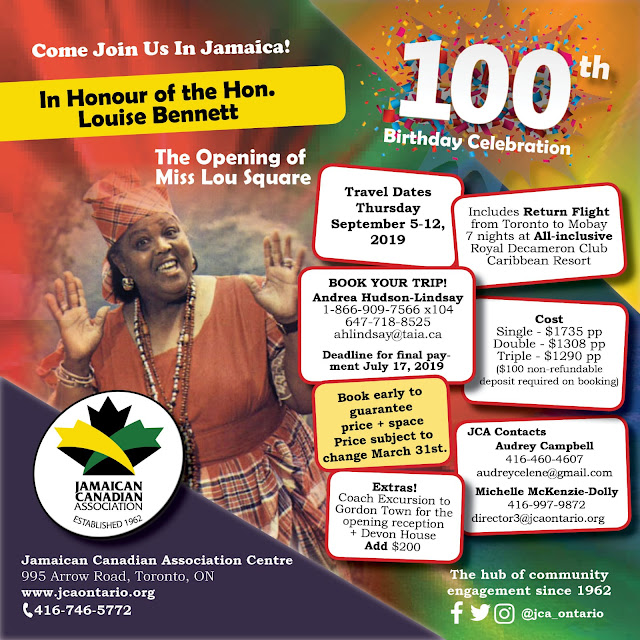