Jamaican Candidates Gear Up for Municipal Elections in Ontario

With just over a month before municipal elections in Ontario several Jamaican candidates are campaigning to become the councillor, regional councillor or school board trustee of their cities.

Carleen Blissett is running to be councillor of Whitby’s East Ward 4, Jermaine Chambers for Brampton’s Wards 2 and 6, Allan Jones for regional councillor of Wards 2 and 6 in the Region of Peel, and Kathy McDonald, the incumbent Peel District School Board trustee for Wards 3 and 4 who wants to retain her position.

The Ontario municipal elections will be held on October 22.

Blissett thought about running in the municipal election for years and decided to do it this year because there is no incumbent in Whitby’s East Ward 4.

“There is a need for a change and I feel that I can represent the changing diverse demographic in Whitby,” she says, noting that her work as a municipal standards officer at the City of Toronto gives her an understanding of how municipal government works.

When residents call into the city or to their councillor she goes out, investigates and resolves their problems.

“I have a strong understanding of the bylaws of the city and also the inner workings of government. With that experience I think that I am able to do a good job on council. I’m able to be a strong voice for the east ward here in Whitby,” says Blissett who is also a paralegal and therefore able to advocate on behalf of residents.

She has knocked on thousands of doors since her campaign started and the number one concern of residents is safety in the community.

“People are concerned that the traffic here, especially in our Ward 4, is becoming increasingly dangerous to the point where there is a lot of speeding. There is a lot of young families here and there are also a lot of senior citizens and schools.”

Property tax is also a concern, says Blissett, noting that there are many seniors who have been living in the community for most of their lives and as property tax increases they may have to choose whether they can afford to stay in their homes.

A resident of Whitby for sixteen years, she wants to ensure that it continues to be a “vibrant and livable city for everyone.”

Originally from from Moores, Clarendon, Blissett migrated to Canada in 1986 to join her mother and siblings.

Chambers currently serves on the inclusion and equity committee of the City of Brampton and notes that this gives him a good view of some of the things that happen in the city.

“Being a resident I’ve seen some areas of development that are needed and I’ve had some concerns,” he says, noting that it is one thing to help as a volunteer and another “to get things done when you are a decision maker.”

He thinks as a decision maker he will be able to move things forward for all the residents of Brampton and therefore decided to offer himself to them as an option for city council.

Chambers’ election platform includes addressing high property tax in the city, which he says has increased to more than 16 per cent over the last four years.

“I think one of the things that has contributed to that is our spending pattern. Brampton, I think, has a serious spending problem and these career politicians have gotten into the business of taxing and spending.”

He believes that his background in finance as someone in banking for over thirteen years has given him a good vantage point for understanding “how you manage people’s money on their behalf.”

One of his ideas is to have a two-year freeze on further tax increases to get spending under control and give residents a break.

Chamber said snow removal is a disaster in the city as during the winter the service is poor and needs to be improved.

He is also advocating for more recreational facilities because many sports teams within Brampton have to travel outside the city to hold some games due to the lack of good amenities in the city.

Identifying crime as an issue, Chambers is organizing an annual anti-violence, anti-gun, anti-drug march because he believes that “as a city we have to get everyone onboard on the same page to take an active stance against violence in our city.”

He also notes that over forty per cent of calls to the Peel Police have to do with mental health issues and cited Hamilton as having a similar situation but that city piloted a program in which mental health professionals responded to some of these calls.

Chambers said this reduced the number of police officers who were dealing with those cases and diverted their attention to fighting crime.

He is also concerned that Peel Region has less police per 100,000 residents than other regions around Ontario. He wants to increase the number to 188 officers per 100,000 – the average for most regions -- instead of the existing 130 officers in Peel.

Chambers, who is from Montego Bay and immigrated to Canada in 2010, thinks the city needs active neighbourhood watch programs that have the support of city hall and the police.

McDonald was first elected as Peel District School Board (PDSB) trustee for Wards 3 and 4 in 2014 and wants to continue the work that she started.

“I think that I have made an impact I think being there my first term.  I think as a result of me being at the board table some very exciting changes have occurred and I want to continue them.”

She said there is still much that the board needs to do and even though she is optimistic about the direction in which things are going she still thinks “we can’t say, oh great, everything is perfect in Peel.”

Among the changes have been the PDSB admitting that there has been systemic discrimination against black students – something she describes as a huge step.

The We Rise Together initiative to support marginalized black male students was created as a result of this but McDonald says it is not perfect and there is a lot of work to be done.

“People looking from the outside might say it’s all talk, what’s happening. It’s a huge system and a lot of it takes time and I’m hoping to sort of speed it up along because I myself am impatient with the rate of change. I understand that I don’t expect everything to be solved overnight but I think it’s a work in progress and we have to keep the board, and the public needs to keep us accountable and keep the fire under us to make sure that we’re doing our jobs properly and change is occurring.”

McDonald is also proud of the Poverty Indicators report published in February 2018 that is the result of a request she made to the board in August 2017 to examine what was happening to students in poverty and to see if the board had an action plan to support them.

She said the disaggregated data was very shocking and showed the great discrepancy for kids in poverty vis-à-vis kids from high-income families with regard to the gifted program.

The school board trustee also pushed for equity in the hiring of teachers by the PDSB so that Indigenous, South Asian and Black teachers are hired to reflect the population of students.

McDonald says she liaises with many community partners and has advocated for an increase in the SciTech program at Centennial school because she thinks it is important to prepare students for the future in robotics, electronics and computer technology.

She also brought the Hammer Band music program -- that originally started out of Regent Park, Toronto for kids in disadvantaged neighbourhoods – to schools within and outside her wards to expose kids to art and music.

McDonald is from Mandeville and migrated to Canada in 1988 where she attended McGill University in Montreal and subsequently relocated to Ontario in 1992.

Jones had an urge to run for a long time but kept putting it off until now when he realized that he was getting older and thought “some great man had said if not me, who, and if not now, when.”

A resident of Brampton for nineteen years, he sees a lot of potential in the city and says he wants to make it a better place for “us all to live.”

“I think as a community, my personal community, we need representation in Brampton. We haven’t had it for quite some time and it’s quite unfortunate that even people who represent us as part of their ward are not bringing forward our concerns.”

Jones is of the view that it is bad if someone has to belong to a particular ethnic group to receive representation from an elected politician.

“I’m here not only to represent the Black community but just about anybody who lives in my ward and beyond, whether they live in Brampton, Mississauga, Caledon – that’s part of the whole region.”

He wants Brampton to be a healthy city – its economy and residents – “because if you’re not healthy, if you don’t have health you cannot participate in the economic wealth of the city.”

Jones said the medical officer of health reported that the Region of Peel has one of the highest diabetes rates in the country and Brampton, specifically, has a very high rate.

He attributes this to the makeup of the city; South Asians make up about 44-per cent of the population and African Canadians about 14-per cent, a total of 58-per cent.

Describing this as an epidemic and a devastating disease, Jones said many people in and about Brampton are not able to participate fully in the city because they are ill.

He said the city can start a campaign in common places where people meet like bus sheds, on the big screen of the Rose Theatre in downtown Brampton and in restaurants.

Jones said most of the effort around diabetes is focused on when a person already has the disease but not enough emphasis is placed on preventative approaches.

Eating the right meal in schools, exercising at facilities across the city where there can be competitions between different regions to get people in a competitive spirit to remain healthy are some of the ideas that he thinks can be implemented.

Jones wants to stabilize or minimize increases in taxes and restrict “runaway labour costs as Brampton’s population continues to grow.”

He said there is a big downtown reimagined project that is to come into fruition in about two years or so where common spots for people to walk will be provided in a park atmosphere.

“I’ve always seen Brampton where you can allow people to park elsewhere and have a transit system that brings people into the downtown core. And have it at flexible times so that when people leave activities there’s no problem with them getting back to their vehicles as there is a restriction in parking downtown.”

He said there will be a lot of spinoffs from the establishment of Ryerson University in downtown Brampton.

Jones said he is all for compromising, reasoning and talking things out where bringing Light Rail Transit (LRT) to the city is concerned.

Jones, who is from Rockfort in Kingston, immigrated to Canada in January 1981.


In Ajax, the incumbent Durham District School Board trustee, Patrice Barnes, is seeking re-election to represent Wards 1&2 and Kenroy Wilson is running for councillor in Ward 2; in Toronto, Felicia Samuel for Ward 44 Scarborough North and Tiffany Ford for Ward 7 York West; and in Vaughan, Fitzroy Gordon for Ward 1 and Charline Grant for York Region District School Board, Wards 1&2. For a more extensive list of candidates, visit the Instagram page of Operation Black Vote Canada. 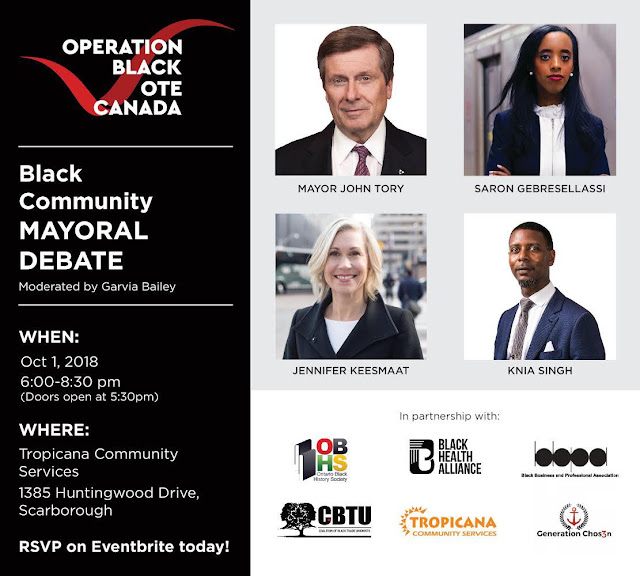