Black Canadians are Gearing Up for the Federal Election

The six leaders participated in two official debates organized by the Leaders’ Debates Commission. The English language debate took place on October 7 and the French on October 10 – both at the Canadian Museum of History in Gatineau, Quebec.

In a press release in July Operation Black Vote Canada (OBVC) noted that it organized meetings with the leaders of Canada’s four main political parties – Trudeau, Scheer, Singh and May – and presented them with a series of proposals designed to help broaden the expansion and inclusion of Black Canadians in the country’s politics.
In part, it called on the federal parties to develop strategies that would expand the number of Black candidates running in winnable federal ridings, with the goal of growing the number of Black MPs across Canada.
On September 3, the Conservative Party of Canada said it became “the first party to reach a full slate of candidates nominated across Canada.”
It noted that this includes “a record number of women candidates with 105, well ahead of the previous high of 68 in 2011. Conservative candidates in 2019 include Indigenous Canadians, LGBTQ+ Canadians, Muslims, Sikhs, Jewish Canadians, Christians, Hindus, Buddhists, and new Canadians including those who immigrated in the 2000s.”

“This team of candidates is among the most professionally and personally diverse group we’ve ever put forward,” said Scheer regarding the 338 candidates.

A close look at the photographs of the candidates running for the four main parties and the relatively new People’s Party of Canada indicates that the New Democratic Party (NDP) has the most racialized candidates on the ballot, several of whom are Black.

There are 21 Black or Caribbean candidates running for the NDP, 11 for the Green, six for the Liberal, two for the Conservative and a few for the People’s Party which does not have individual photographs of its candidates but lists their ridings and links to their twitter and Facebook accounts. The Bloc Québécois appears to have two.

Mavis Ashbourne-Palmer, president of the Saskatchewan Jamaican Association, is concerned about the difficulty that skilled workers who came t to the province under the Saskatchewan Immigrant Nominee Program (SINP) are having with their application for permanent residency.
She said although this falls under provincial jurisdiction there is a role for the federal government to step in to make it possible for teachers, journalists and others, many from the Caribbean who have work permits, to gain their permanent residency.
Ashbourne-Palmer said many have worked in the province for the required period but employers inform them that they are not obligated to help them with letters of support to strengthen their application.
Through the SINP, Saskatchewan invites residency applications from non-Canadians who want to make Saskatchewan their home; and nominates successful applicants to the federal government, so they can gain permanent residency in Canada.
Its website notes that the SINP is only one of the steps toward becoming a permanent resident in Saskatchewan. All applicants must also apply for residency through Immigration, Refugees and Citizenship Canada (IRCC) Canadian Immigration Commission.

Meanwhile, the Coalition of Black Trade Unionists (CBTU) Canada says it is important that the mandate of the next government includes a concrete plan to tackle anti-Black racism in the country.

“Anti-Black racism, as we see it, includes things such as mass incarceration within the Black community, limited employment opportunities and more,” says Mark Brown, the CBTU’s communications officer.

In this election, the CBTU says it is looking for a solid plan and a past history of effective representation on the issues that resonate most within the black community.

“It is our view that Canada's next prime minister must have an understanding of both the lived realities of racialized Canadians and the unique realities of the Black and African Canadians experience. With the recent revelations of the Black-faced costumes worn by our current prime minister and conservative leader Andrew Scheer's refusal to step away from conservative candidates that have made racist remarks in the past, it is clear that a lot of work needs to be done on the issue of anti-Black racism in Canada.”


The coalition is also concerned about the issue of gun violence in the Greater Toronto area and says the incoming government must have a plan to tackle the root issues contributing to gun violence.

“A plan that tackles issues such as poverty, Black youth employment and education strategies within the black community,” says the CBTU.

In the meantime, Donnovan Simon, president of the Jamaican Canadian Association Alberta, says the overall economic situation is an issue in Alberta which has been struggling with getting pipelines and getting oil products out to markets.

“That has been a major thing. The other thing is immigration and what the next government, whoever it is, will do or continue to do to allowing immigrants to become a part of the Canadian society.”


Simon says from the association’s point of view there are also some questions about the overall political leadership, “the quality of the campaign and what can we really expect of our political leaders at the federal level.”

He notes that poverty and discrimination which manifest itself in under-employment, over representation in the criminal justice system, poor social housing conditions and high cost of housing and rent, are also issues.
“The prospect of change is next to nil without a conscious intervention strategy.

Such a strategy must include commitment of significant funds for programs to address the root causes of poverty and violence, equitable hiring and public appointments of qualified Blacks to public service and public agencies, boards and commissions, the judiciary and other positions of influence where these individuals will be able to influence public policy and decision-making as well as being role models to other young Black children and youth…,” he said.

[An edited version of this story was published in the North American Weekly Gleaner, Oct. 3-9, 2019.] 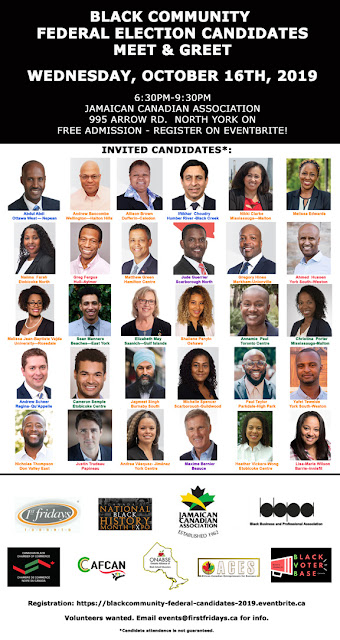 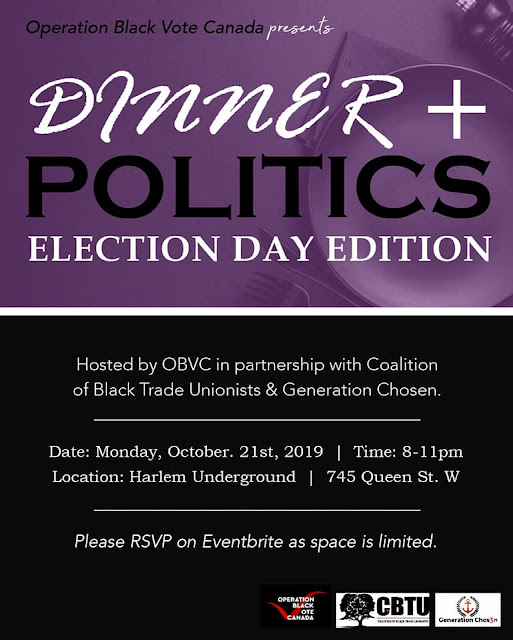