Despite Premier Doug Ford’s cancellation of the annual Canada Day celebration at Queen’s Park, there was an event held on the front lawn of the Ontario legislature to mark the occasion of the country’s 152nd birthday.

Jamaican-Canadian Member of Provincial Parliament (MPP) for Scarborough-Guildwood, Mitzie Hunter, says about 1000 people attended what she organized and dubbed the “people’s picnic” on July 1.

“Today is Canada’s birthday and nobody says no to Canada Day. We have to open Queen’s Park and invite people down to celebrate the birthday and the founding of our province and our country,” says the Ontario Liberal Party politician while speaking with the Gleaner at the event.

She says the event which started at 11:00 a.m. and ended at 3:00 p.m. attracted hundreds of people, “mostly families, some who have been coming as traditions with their children and now they’re parents and it’s just a wonderful way to celebrate the birth of this nation.”

Instead of hosting the Canada Day celebration, the Ontario government decided to cut costs by offering free admission to 10 attractions across the province.

Free Canada Day admission was offered to the first 500 people at Ontario Science Centre, the Royal Ontario Museum as well as a number of others across the province.

According to government officials the plan to offer free admission was cheaper than it would have cost to run the traditional Canada Day party at Queen's Park.

Hunter said they started off with a land acknowledgement and the explanation of the Indigenous Peoples who have been steward of this land for thousands of years and “to all of us who are now stewards and the importance and the significance of this province and this country.”

“People have come from all backgrounds recognizing that Canada has been good to all of us and it’s about giving back to our nation, being proud of the freedoms that we benefit from here in our province.”

Hunter said her family immigrated to Canada from Jamaica and through hard work her parents worked to make a life for their family.

“My brother and I, our job was to go to school, so we benefitted from a great public education system and eventually I became the education minister. That’s the kind of province and country we live in and we deserve to honour and celebrate our province, celebrate our country.”

She said when the premier cancelled the Canada Day celebration she thought “no, let’s bring it back, let’s have an old fashioned picnic and invite everyone down to enjoy their parliament building here in Ontario.” 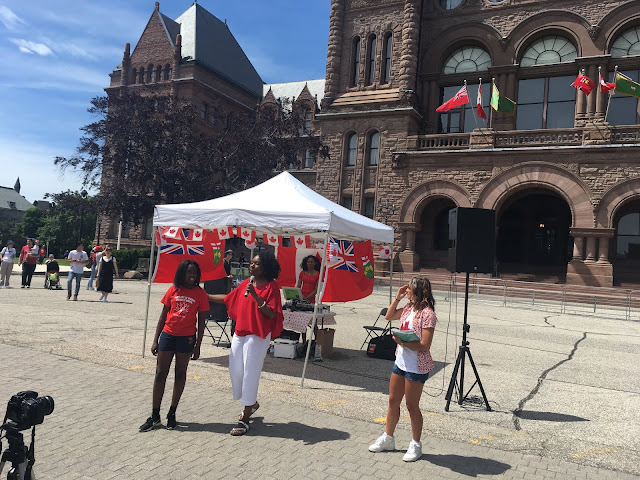 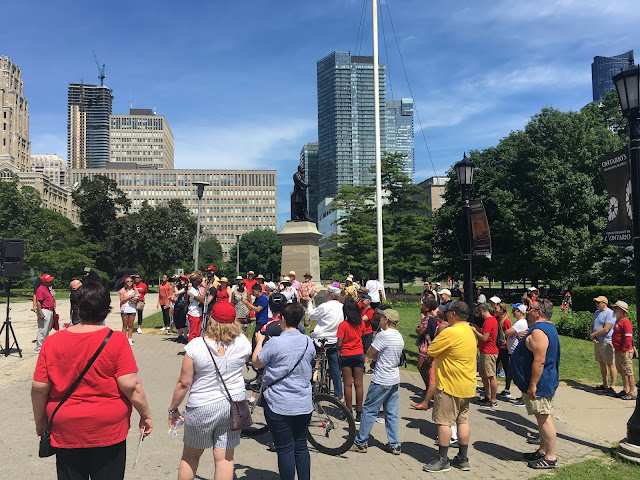 Hunter noted that people travelled from Windsor, Barrie, Hamilton, Scarborough, Markham, Mississauga, Brampton, all over Toronto, and there was even a family from Queen’s Park in Scotland.

“This has been a joyous day, one person said to me her feeling about today is gratitude and her experience has been joy and that really explains how people felt about being here at Queen’s Park today for Canada Day.”

Canada Day celebrations were held in the nation’s capital, Ottawa, and in cities throughout the country in different forms – some with speeches from politicians, performances, barbecues and fireworks.

In the June 2018 Ontario general election, the Ontario Liberal Party was defeated by the Progressive Conservative Party led by Doug Ford and was reduced to seven  MPPs which is below the number of seats required for official party status in the Ontario legislature. The required number is eight.

As the former CEO of the Greater Toronto Civic Action Alliance, Hunter worked to solve some tough social, economic, and environmental challenges.

Previous to this, she was the Chief Administrative Officer (COA) of the Toronto Community Housing Corporation, Vice-President with Goodwill Industries, and a Regional Director at Bell Canada.

Hunter grew up in Scarborough, graduated from the University of Toronto Scarborough Campus with a BA, and completed her MBA from the Rotman School of Management.

Meanwhile, the main federal party leaders were out and about in what some speculate were campaign-style stops as Canada’s general election approaches on October 21.

“This year, we have a lot to celebrate. In the last four years, Canadians have created more than a million new jobs. The unemployment rate is at its lowest since the 1970s. And across the country, 825,000 Canadians have been lifted out of poverty. There’s never been more opportunity, or more progress to share in. And that’s thanks to Canadians, like you,” said Trudeau in his Canada Day statement.

Conservative Party Leader Andrew Scheer was in Medutic, New Brunswick, then at Toronto Ribfest in Etobicoke before heading to Kelowna, British Columbia.