From as early as shortly after 9:00 p.m. some people began arriving for the celebration which had a 10:45 p.m. start time.

One woman said she met the train at Downsview last year, but she didn’t want to miss the entire experience this year so she came to Union straight from work.

Hundreds gathered at the Brookfield Place entrance to the subway for the opening ceremony, with Toronto Transit Commission (TTC) personnel having to open the entrance/exit doors to allow fresh air inside.

Two TTC staff members estimated that the ‘freedom’ train had about 700 people in it, and that there were some people who had gone ahead on a previous train who were not counted in this number.

“Our ancestors dreamed of moments like this,” said Itah Sadu, co-owner of A Different Booklist Cultural Centre: The People’s Residence, whose idea it was to do this now annual event five years ago – combining the significance of the Underground Railroad and Emancipation Day.

“The Middle Passage was a demonstration of our potential,” she said, noting that, “
It showed our resilience as a people.”

She said the declaration of Emancipation Day, (Aug. 1, 1834) throughout the British Empire was a recognition that people of African descent would no longer be sold as commodities.

Sadu hoped that everyone would make a step and think about change – “Think of our everyday excellence as a people.”

She thanked everyone, including Dr. Edith Lorimer and a medical team, for being there to support the event.

Following in the footsteps of that famous Underground Railroad conductor, Harriet Tubman, Zanana Akande, the conductor of last night’s ride thanked Tubman and all the people who made it possible “that we could send our children to school and have them succeed.”

She noted that “we have come this far and we can do more.”
“Before we close our eyes, let’s make sure that we’re all free.”

Akande, a community matriarch and advocate, was the first black woman elected to the Ontario legislative assembly and to also serve as a cabinet minister in Canada.

Celina Caesar-Chavannes, MP for Whitby, and parliamentary secretary to the minister of international development, brought greetings on behalf of Prime Minister Justin Trudeau.

As if taking his cue from what Akande said about freedom, Cole asked, “Mayor Tory, are we all free?” --  referencing the July 27 meeting of the Toronto Police Services Board (TPSB) where he spoke out about the alleged beating of 19-year-old Dafonte Miller of Whitby, Ontario by Toronto police officer, Michael Theriault, and his brother, Christian Theriault, a civilian. Both have been charged by the Special Investigations Unit (SIU).

Cole was escorted from the police headquarters – venue of the TPSB meetings --, fined, and told not to return.

“I don’t think that anybody here should be stopped from riding the liberation train, not even you. But if you’re going to be here tonight you have to hear and see what black liberation actually means,” said Cole to the mayor last night.


There were chants of “Black Lives Matter” from several people in the crowd in support of Cole’s comments.

Tory then continued his speech by reading a proclamation from the City of Toronto regarding Aug. 1 -- Emancipation Day.

Josh Colle, Chair of the TTC, said the transit commission was thrilled to partner with that event and looks forward to it happening for many more years to come.

He noted that it has become a landmark event on the TTC’s calendar.

Yolanda McClean, president of the Coalition of Black Trade Unionists (CBTU) announced that on Nov. 18 at the Roundhouse Park there will be a ribbon-cutting ceremony to unveil a plaque in memory of the Brotherhood of Sleeping Car Porters.

At one time in Canada’s history, the only job that was available to black men was that of a sleeping car porter.

Meridian Ashamock, a 16-year-old high school student and visual artist, of Cree Nation had welcomed the event and given permission for it to proceed.

After a moment of silence, as the train pulled out of Union station, d’bi.young.anitafrika, dub poet, shared her poem, Freedom Train, with her sons, Moon and Phoenix, onboard listening.

“Freedom Train, Ase. Ancestors, Ase. We herald.
We know that we are nothing without you…Onboard the Freedom Train
Our lives have purpose. We are human…”

At the end of her performance, the singing started of songs such as: “Ain’t Gonna Let Nobody Turn Me Around,” “This Little Light of Mine,” “Swing Low Sweet Chariot,” “I Shall Not Be Moved,” “There’s a Meeting Here Tonight,” and after Emancipation Day was announced on the train’s intercom, everyone sang Bob Marley’s “One Love.”

When the train arrived at its destination, Sheppard West, everyone got off and made their upstairs for the conclusion of the ride where again there was singing, including the Black National Anthem, “Lift Every Voice and Sing.”

[Here's another event where Zanana Akande will be speaking -- a celebration of the 100th anniversary of the UNIA. Thanks Nene Kwasi Kafele for the information.] 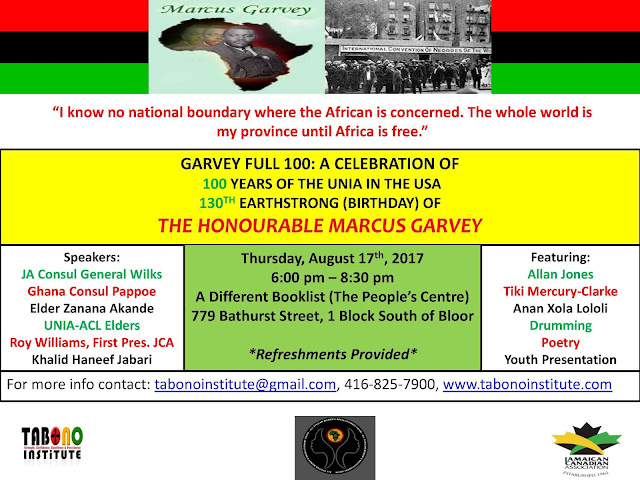