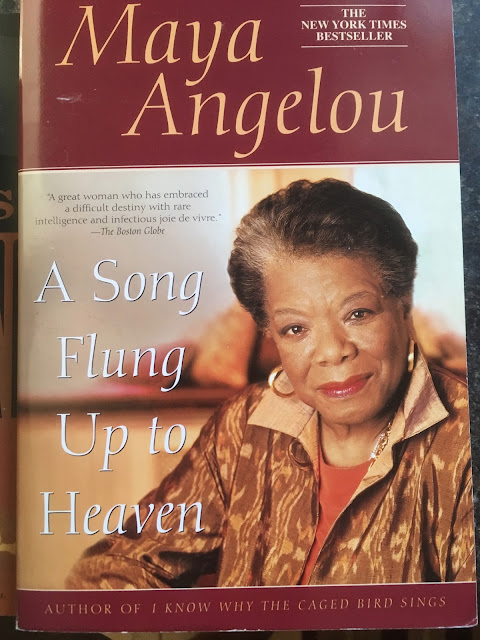 The late Maya Angelou, renowned author, poet, singer, actor, director, professor and activist was born on April 4, 1928 in St. Louis, Missouri. She died on May 28, 2014 in Winston-Salem, North Carolina at the age of 86.

I met her in May 1993 in Jamaica when she was there for a book signing at a bookstore in Kingston. She signed my copy of her bestselling first autobiography, “I Know Why the Caged Bird Sings,” with one word, ‘Joy!’ We met again by telephone in 2003 when I interviewed her in the late summer, a few weeks before she presented the Unique Lives & Experiences lecture at the SkyDome in Toronto on September 29. She was in her office in Winston-Salem.

The late Toronto Star journalist, Barbara Turnbull, who introduced her at the event, wrote in a letter from The Barbara Turnbull Foundation for Spinal Cord Research in December 2003 that Dr. Angelou “spoke about rainbows and how we each have one inside of us, and how we can be rainbows for each other.”

My interview focused on “A Song Flung Up to Heaven,” the sixth volume of her critically acclaimed landmark autobiography.

Published by Bantam Books in 2003, the paperback edition, this is how the book is described on its back cover:

“The journey chronicled in this final volume begins as she returns from Africa to work with Malcolm X, only to learn that he has been assassinated. Searching for a “path back into life,” she drifts from job to job – band singer in Hawaii, market researcher in Watts, actress in an experimental theater troupe in Los Angeles – until the terrible day when she watches Watts explode in violence, a riot she describes in unforgettable detail. Devastated and uncertain about the future, she moves to New York, where she makes a new life for herself amid a lively group of black artists, writers, and musicians that includes James Baldwin, Paul Marshall, Rosa Guy, Abbey Lincoln, and Max Roach. But then political activism calls to her again, this time in the voice of Martin Luther King, and she agrees to help him organize his Poor People’s March on Washington.

“When King, too, is assassinated, Angelou goes into hibernation. How James Baldwin helped her to find her voice again, and put her on the path to writing I Know Why the caged Bird Sings –the first line of which is the last line of A Song Flung Up to Heaven – is the crowning story of a book filled with tales from a life fully lived.”

Incidentally, Dr. King was assassinated on her birthday, April 4, 1968 in Memphis, Tennessee.