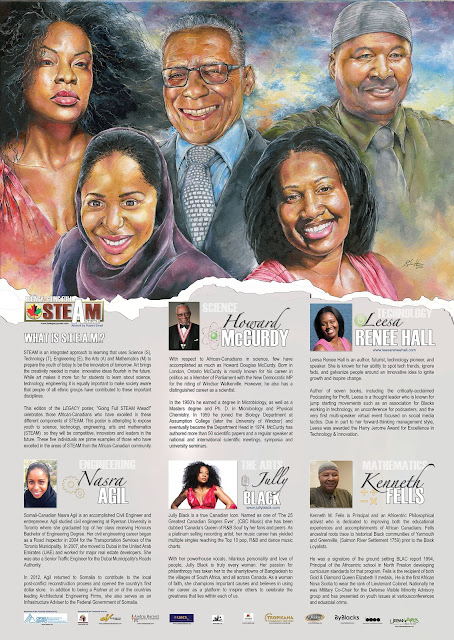 Artist Robert Small, who has been creating posters to celebrate Black History Month since 1995, has this year turned his focus on science, technology, engineering, the arts and mathematics (STEAM).

The theme of the Legacy poster matches that of an educational activity booklet for children highlighting these disciplines that he started in 2016 and continues this year.

“I wanted to get people who have excelled directly in that field or use an aspect of that field in the work that they do,” says Small.

McCurdy, a former MP in Windsor and co-founder of the National Black Coalition of Canada, was educated at the University of Michigan in science.

He became the first tenured African Canadian faculty member in Canada when he became a microbiology and chemistry professor at the University of Windsor.

Small says he felt there was a void in the posters he had created and wanted to outreach and focus more than just on African Canadians and Caribbean people.

“Painting her wearing the hijab and everything, given the times that we’re in, is an important message to say that Muslims within our community are part of our community too,” says Small about Agil who is in her 20s, excelling in engineering, and has opened up the first Dollar Store in Somalia.

Black is a successful artist who has been in the music business for over 20 years and uses social media to promote her work.

Small included her to show young people that “even if you want to get into music you still have to be adept in a lot of different areas. You can’t just be a singer or you can’t just write. In order to be able to keep on promoting yourself you have to be knowledgeable about getting yourself out on social media and keeping yourself relevant.”

He says Hall is an author and technology pioneer in Canada who has written seven books related to social media and other areas.

Three years ago, Small went back to teachers’ college with the aim of wanting to create something that relates to what he is doing right now.

“It wasn’t really to go to there in order to start get a job as a teacher. So I thought of creating this booklet that focuses on science, technology, engineering, arts and math that ties in arts to those disciplines, and that it could be a useful resource for teachers and parents.”
The new edition has different activities that relate to the history of Blacks in Canada, such as one about Viola Desmond that challenges students to draw a $10 note featuring her.

The late Desmond was a civil rights pioneer whose image the federal government recently announced will appear on the $10 note, starting in 2018 – the first Canadian woman to be on Canadian currency.

“I tell her story and the person has to image creating a $10 bill based on the story that they’ve read.”

There are also three pages related to financial literacy and educating youth about the stock market, word searches and math games.

This was created so they that get to understand how stocks go up and down, that the price fluctuates, and that they could start buying stocks from now.

“And that it doesn’t matter how much you put in right now, it’s really that you just do it consistently. And that I felt was a good message to be sending out to the Black community to get ourselves more financially aware,” says Small noting that his parents never talked to him about stocks.

Small says he decided to sell the booklets for $2, digitally and physically, because “a lot of people in our community don’t have access to technology as much as they need to so they can easily get lost in the shuffle.”

He created the booklet to provide practical exercises for those who might not have access to a computer so that they are not left out.