Ontario’s only legal aid clinic mandated to challenge and eradicate individual and systemic anti-Black racism has written an open letter calling for support for human rights in reaction to two recent appointments that the Ontario government made to the Ontario Human Rights Commission (OHRC).

In January, the Toronto Star reported that the government appointed Randall Arsenault, a 19-year veteran Toronto police officer who has Indigenous roots, and Violetta Igneski, an associate professor in philosophy at McMaster University.

Renu Mandhane, chief commissioner of the OHRC, expressed concern that they were not among the applications she reviewed. She was surprised by the news of the appointments.

Ruth Goba, executive director of the Black Legal Action Centre (BLAC), says the appointment of the police officer comes while the OHRC is in the midst of its inquiry into racial profiling by the Toronto Police Service.

The statistics it revealed were shocking to some, but for many in the Black community, the report provides critical data where our anecdotal evidence is disregarded or ignored, says Goba.

“The OHRC’s role with respect to human rights policy and education for all equity–seeking communities in our province is critical. This is an unacceptable development in our province – just one of many – that will only serve to further entrench the systemic anti-Black racism that impacts our community in every facet of our lives. These appointments make a mockery of the OHRC’s role, and are a direct attack on its integrity, on the work on anti-Black racism, and therefore, our community.”

In the letter, BLAC said on January 14, 2020, Premier Doug Ford seemingly circumvented the provincial appointment process to appoint two people to sit as commissioners with the OHRC.

It says a commissioner’s role is to govern the OHRC and to provide it with strategic direction, noting that the commission is supposed to be an independent and impartial organization that ensures all Ontarians are free from discrimination.

The OHRC’s independence from government and impartiality are necessary components for it to fulfill its mandate in a credible way, BLAC said.

“According to a Toronto Star report, though the Public Appointments Secretariat received 300 applications from people wishing to serve on the commission, the two individuals appointed on January 14 were, it was reported, not part of the pool of applicants shared with the chief commissioner for her review, which is standard procedure. As a result, it is unclear whether the individuals actually applied for the positions to which they have been appointed,” the legal clinic said.

BLAC said if they did not, to say that this is problematic is an understatement.

“If they did not, all those who value human rights and believe in the importance of the human rights system should be enraged. We at BLAC, as members of the Black community are alarmed, and extremely concerned, about the integrity of the OHRC and its ability to combat racism, anti–Black racism and all other forms of discrimination in this province. We should all be extremely concerned about Ford’s utter disregard to ensure representation of the diverse communities in this province on the governing body of the OHRC.”

BLAC noted that this seems to be one more step in Ford’s gutting of the human rights system in Ontario as the number of human rights adjudicators has significantly been reduced since he took office.

It also said that this is “further evidence of his complete disregard for a merit-based process with respect to public service in the province.

“Make no mistake that Black and other communities in Ontario rely on the human rights system and the community legal clinic system (also gutted by Doug Ford) in order to access justice.”

In its response, the Attorney General's office said the appointments were made by the cabinet, a standard practice for OHRC commissioners.

While agreeing that the appointments were legally valid, Mandhane said the process violated an agreement established between her office and the Attorney General in December.

Under that agreement, the government was to review her shortlist of candidates and consult with her before making appointments to the commission. She noted that this was not followed.
BLAC said since June of 2019, no commissioners have been in place. Ford did not reappoint any existing commissioners to their posts.

“This attrition of commissioners, his apparent failure to appoint any that actually applied (as reported), and then to appoint only a supporter, and an active duty police service constable, appears to be an attempt to undermine the OHRC’s credibility. The appointments come at a time when the OHRC is in the process of finalizing an inquiry into racial profiling and racial discrimination by the Toronto Police Service.”

The contracts of most former commissioners have expired and the government opened up applications to the OHRC in November. There are now only three commissioners at the agency, which has historically had about nine members.

[This story has been published in the North American Weekly Gleaner, February 20-26, 2020.] 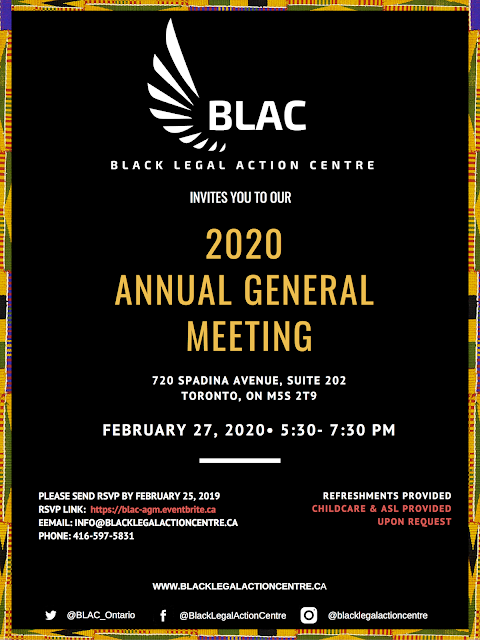