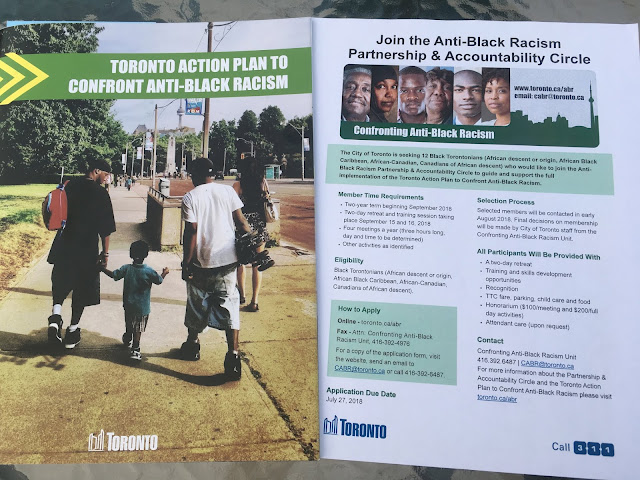 The City of Toronto is seeking twelve Black Torontonians who would like to join the Anti-Black Racism Partnership & Accountability Circle to guide and support the full implementation of the Toronto Action Plan to Confront Anti-Black Racism.

This was among the updates shared by Aina-Nia Ayo’dele, manager, and Mohamed Shuriye, senior policy development officer of the city’s new Confronting Anti-Black Racism Unit at the Black Coalition for AIDS Prevention (Black CAP) on June 19.

Ayo’dele, a Jamaican who was the community consultant and project manager for the Action Plan, said they chose four community partner agencies to do follow-up sessions: Black CAP, Jamaican Canadian Association, Taibu Community Health Centre and a Somali group in Etobicoke.

She says since the unit was set up there have been several internal updates in the City of Toronto’s departments and staff from the Confronting Anti-Black Racism Unit are willing to visit any agency or group who wants to hear more about their work.

In December 2017, City Council approved the Action Plan that will be implemented over a five-year term, 2018 to 2022. The implementation will be based on five annual work plans, starting in Year One (2018), and a corresponding progress report.

The next steps include the establishment of the Anti-Black Racism Partnership & Accountability Circle comprised of diverse Torontonians of African descent to support the implementation of the Action Plan.

Each member will serve a two-year term beginning September 2018 and there will be four three-hour meetings a year. A two-day retreat and training session will be taking place September 15 and 16, 2018.

The application deadline is July 27 and those selected will be contacted in early August.

Ayo’dele and Shuriye also encouraged those in attendance to apply for positions on city boards or committees as Toronto residents are needed.

Outlining the process of arriving at the action plan, Mayor John Tory noted in the Toronto Action Plan to Confront Anti-Black Racism that the city took the many reports on racism that have been written over the past 41 years and put their recommendations in front of people for discussion.

Forty-one community conversations were held by the city in partnership with community organizations.

“We wanted to know which actions Toronto’s Black communities felt would make the greatest difference in their lives.”

These conversations drew more than 800 participants who shared their experiences, their priorities and their concerns.

The mayor noted that the Action Plan has five themes, 22 recommendations and 80 actions that the city will undertake.

The themes are: children and youth development, health and community services, job opportunities and income supports, policing and the justice system, and community engagement and black leadership.

“As some first steps, I met with senior staff, including Black leaders in the Toronto Public Service to begin identifying systemic barriers inside City Hall. I heard a lot about the culture change that needs to happen here, starting with comprehensive training of staff to recognize, understand and shift anti-Black racism thinking and practice,” Tory said.

He noted that aided by community expertise, this work will help seed systemic change that will positively impact service planning, policy development and customer service.

The Action Plan notes that Toronto is the most diverse city in the world. However, the experiences of Black Torontonians and studies continue to show that anti-Black racism still exists in the city, affecting the life chances of more than 200,000 people of African descent who call Toronto home.

It says city-community collaboration will be critical to implementing the plan and ensuring that the actions that are implemented work towards creating equitable outcomes for Torontonians of African descent.