Jamaica’s cultural ambassador, Louise Bennett Coverley, will be celebrated in a new documentary made here in Canada, and also in the naming of a park in her hometown of Gordon Town, St. Andrew.

Recently several artists and civically engaged Jamaican Canadians gathered in Mississauga, Ontario for the taping of a teaser for the documentary, “Miss Lou Say So!,” that is expected out in 2018. The teaser should be ready by July this year.

This is the brainchild of the Louise Bennett Coverley Estate for which Fabian Coverley and Pamela Appelt are its co-executors.

“We, Coverley Holdings Inc. (CHI) & International Agencies Management Inc.
(IAMI) (Is Anancy Mek It) have been charged with the mission to ‘maintain the legacy and memories of Eric & Louise Bennett Coverley,’” says Fabian.

“One of the ways to accomplish this mandate which is an achievable, doable,
meaningful task, to preserve, our culture, heritage, and folklore, we have
joined forces with individuals, that are as passionate on the subject, as we
are to undertake a video/documentary in a professional, successful
presentation, that will be educational, entertaining and beneficial to our
culture and heritage.”

Their aim is to educate and reacquaint millennials and their children, schools and institutions about the Jamaican culture.

"The past gives a reflection of the future. You have to know where you have
been to lay the foundation for the future," say the creators of the project.

CHI / IAMI, Anansi Moving Images Inc., Act from the Heart, and GNM Genesis
are in the process of developing the full length video/documentary.

The production team includes: Clayton Coverley, Ian Farquharson of Anansi Moving Images Inc., Suzanne Coy of Act from the Heart, Nadine Miller of GNM Genesis, and Dayan Robinson.
“With the advancement in technology, social media, and generations, we are obliged to advance the knowledge and techniques available to us to educate the young, mature and elderly, together,” says the team.

Preliminary short interviews were shot during the week of June 4 to 10 for the “Miss Lou Say So!” trailer.
“Something of this undertaking is not done alone, but with some passionate people involved. As you know and have realized, Miss Lou is bigger than any one individual,” says Fabian.

He said they are guided by Appelt who has been “tallawah” to him and his family from inception.

The teaser, which will be used to promote the full length video/documentary, will be no more than 120 - 180 seconds long. The documentary is expected to
be 60 - 90 minutes long.

The documentary, which will involve in-depth interviews on culture, heritage, impact and Miss Lou, should be released in the summer of 2018.  The creators will also be traveling to Gordon Town, Jamaica; Fort Lauderdale and West Palm, Florida; and New York City to shoot footage.

It will also involved internationally renowned artists singing snippets of Miss Lou’s folk songs, interviews of people who knew her and studied her work, and performances.

Meanwhile, as a legacy project to celebrate Jamaica’s 55th anniversary of Independence the government of Jamaica has endorsed an initiative from the Jamaica 55 Canada steering committee which is chaired by Appelt.

Speaking at the 30th anniversary of P.A.C.E. Canada’s Strawberry Social in Toronto on June 4, Olivia ‘Babsy’ Grange, Jamaica’s minister of culture, gender, entertainment and sport, announced that in partnership with the committee there would be “the Miss Lou Square, a statue, and the development of the Gordon Town Square in honour of Miss Lou.”

She said York University will be hosting a lecture series for Jamaica 55 and she hopes the Jamaica’s education minister, Senator Ruel Reid, will be one of the presenters.

For Jamaica 50, the legacy projects here were the publication, “Jamaicans in Canada: When Ackee Meets Codfish,” and the Lifelong Leadership Institute where from grade 8 students are assisted right through to university.

[This story is in the June 22, 2017 issue of the North American Weekly Gleaner.]

Here is some information that Fabian sent yesterday about another filming of the teaser. 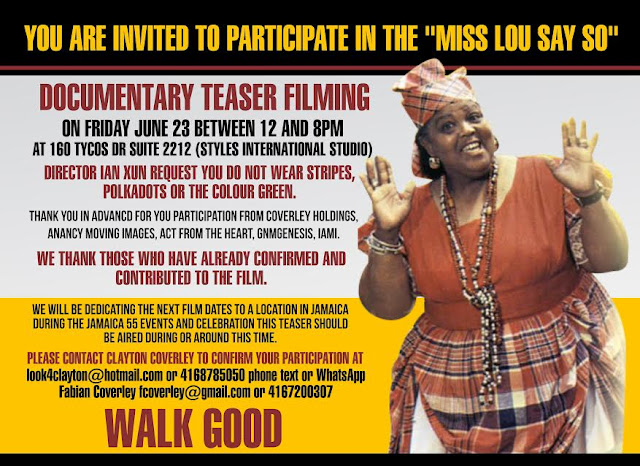